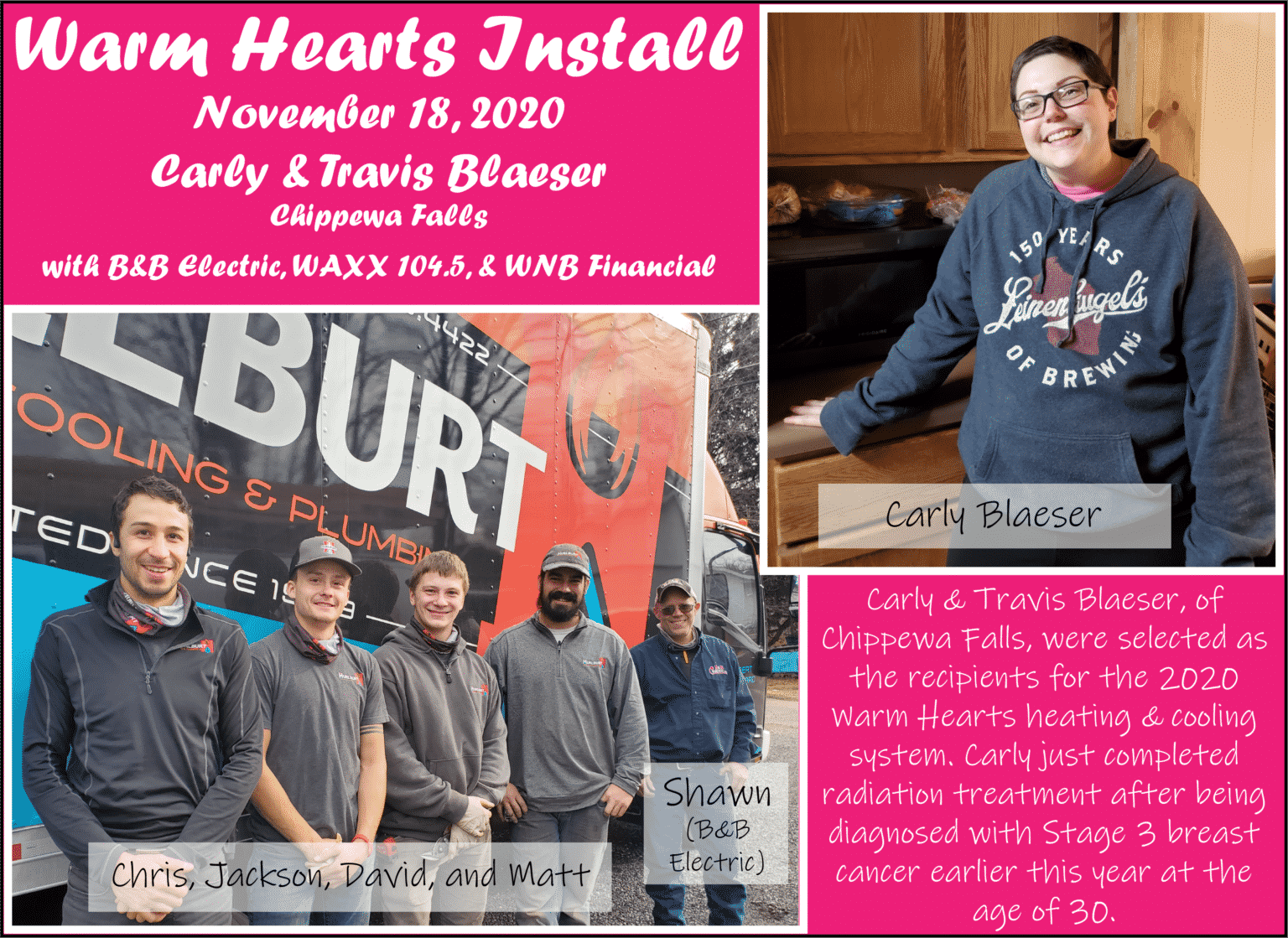 Hurlburt Heating & Plumbing is honored to have taken part in WAXX 104.5’s Warm Hearts program to provide a new, high-efficiency Lennox heating and cooling system to a local family affected by cancer.

A team from Hurlburt Heating & Plumbing donated and installed the new system on Wednesday, November 18, for Travis and Carly Blaeser, of Chippewa Falls, with assistance from B & B Electric. WNB Financial also provided a monetary contribution to help the Blaesers offset some heating costs this Winter.

Carly noticed a marble-sized lump under her arm last October. At only 30 years old, and having no family history of breast cancer, no one was concerned. Mammograms and ultrasounds lead a medical team to believe it was an infection of some sort; no tests indicated cancer.

On January 15, Carly went in for a procedure to drain what they assumed was an infected cyst, which had grown to the size of a large apple. However, her doctor was unable to drain any fluid from the supposed cyst. Carly noted the surgeon was acting a bit odd after the procedure, but didn’t tell her much. That Friday, two days after her appointment, she received a call informing her of their findings:

A biopsy had revealed the cancer, and the rest of January was filled with doctor appointments for Carly. She eventually found out it was Stage 3 and had spread to some of her lymph nodes. Carly began chemotherapy treatments on February 10, and received treatment every week until May, then began more intense chemotherapy once every 3 weeks. Her last chemotherapy treatment was July 15.

Carly then had a double mastectomy on August 11, and recently completed 28 days of radiation therapy.

Throughout this time, from diagnosis until treatment completion, Carly, and Travis have both remained working. Carly has been able to continue her work from home, though she hasn’t been able to work 40 hours a week.

“On multiple occasions I’ve watched Carly give whatever she could to anyone who needed it,” Emily said. “This would be an amazing opportunity for some very well deserving people.”

Carly said when she and Travis bought their house, they were told the furnace was over 30 years old. They had hoped to get a new furnace last winter, but after her cancer diagnosis, were forced to wait, and hope the furnace lasted at least one more year. They also did not have central air, and due to side effects of her treatment, spent much of the summer sitting in front of their window unit to try and stay cool.

“I have no words,” Carly said. “Everything has fallen into place. I’m so blessed. I’m still here.”